Previous TRAINING FOR L.I.F.E.- THE FOUR SOLUTIONS OF FAT LOSS
Next MARY’S STORY- A PLAN FOR L.I.F.E.

Rodney is 40-year-old banker who lives in London with his wife and two children. When he decided to put his mind and body towards fat loss, he progressed and reached his goals.

The following three graphs chart his progress. Notice that this is longer than a typical 12-week programme, and results are sustained for longer than 12 months. 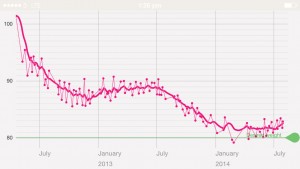 In this graph, we can see the rapid growth stage with a 16kg or so gradual drop in weight from pre-July 2012 to December 2012. Christmas excess came and halted the success curve, and around two kilograms were added (slowly) to July, peaking over the summer vacation. July 2013 saw a rapid growth stage for six months, with seven kilograms burnt off. January through July is a plateau period near his desired weight, and we are seeing a trend of weight gain during the summer vacation period.

Rodney’s model weight/fat loss is due to his mixing up his weight training at least twice a week and running home or doing cardio at the gym three times per week. He also walks the dog, and he skis several times per year. 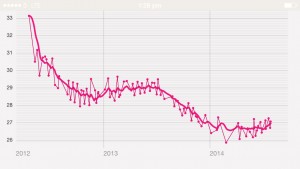 Technically, a BMI score of 30 and above is considered an indicator of obesity, as is 30% body fat. A healthy score is 20-25, plus one for every decade above 30. Rodney is 40, so he is very close to a healthy BMI according to the scale calculations. Rodney has a solid frame of muscle that counts against him on the BMI scale, which is why it is only a gross indicator.

The body fat percentage decrease follows the same trend as the total weight and BMI graphs. Electrical scales score higher when the subject is dehydrated. We can see from this chart that Christmas and summer holidays are where Rodney puts on fat. 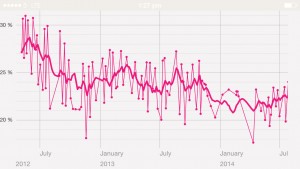 Rodney’s model weight/fat loss is due to the following factors:
• He followed a two-part anti-sugar detoxification for three weeks (part I for 10 days, part II for 14 days). From there, he has stuck to limiting his carbohydrates (apart from summer and Christmas socialising).
• He entered an office fat loss competition. He has been the only one to keep the weight off, as was my caution concern with entering this competition.
• He followed my Bottom Line of Fat Loss gym-based programme: Two resistance training sessions with me and one or two on his own. He ran home interval-style 1 to 3 days per week.
• He entered, trained, and completed in an arduous physical event, which required specific fitness and injury prevention training as opposed to fat loss. This event required two weekend days of hill-walking, 3 to 6 hours at a time. And while, admittedly, this fits into endurance training, the hills and steps make it more strength endurance than cardio endurance.
• He also walked the dog, and he skied several times per year.
• All of this required a change in his weekly schedule; his mind’s focus; what, when, why, and how he ate; and an increase in exercise and purpose of exercise. In other words, significant lifestyle changes.

You can download “The Bottom Line of Fat Loss” at Amazon on Kindle as an e-book, or you can order the printed edition.