Rex Tso, Hong Kong’s only professional boxer, takes his record to 17 Wins / 0 Loss / 10 KOs by emerging victorious at The Venetian, Macau on 18 July 2015! I have been training Rex as strength and conditioning coach and this blog is about my experience at this amazing boxing match!

Strength and Conditioning for Rex Tso

For the last 10 weeks I have been training Rex Tso, Hong Kong’s only professional boxer and contender for a world championship title. You can read my earlier blog entries here and here.

What we did in training will be subject to further blogs and perhaps a trainers’ education course down the road, but for now I am satisfied with quoting Brad Goodman, a Top Rank matchmaker who watched the fight- “Rex has improved 80% since March”.

Before I had seen Rex, I had promised improvement of about 2-3%.

I have thoroughly enjoyed working together with Rex and his training team. Rex is an elite athlete and a true professional. His attitude is very humble. After about a month, I knew if I asked Rex to do something, that he would do it, no matter how hard and challenging. As a trainer and coach, this is just fantastic and illustrates his work ethic.

With strength and conditioning, the continuity of training is self-reinforcing. You can see the weights go up every week, and even Rex was surprised saying, “I never thought about picking up that before.” We still have a lot more to improve on, but it has been a great experience working with Rex. 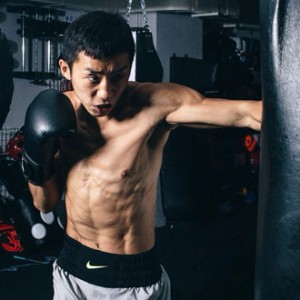 Victory at The Venetian!

This blog is about my experience being involved intimately in a professional boxing match. My “seat” did not have a ticket number as I was waterboy to Rex and had 7 tasks to perform-

To do this I had to leap up from my position behind the red corner post into the ring. 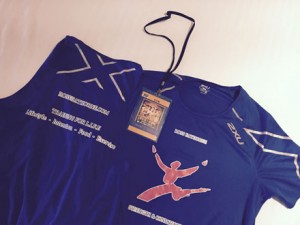 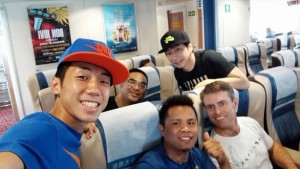 We headed down to Macau a few days before the fight itself. Just like any sport event, the action is interspersed with long periods of waiting whilst officials check documents, and Rex undergoes medical checks and participates in media interviews and the like.

In the run-up to the fight, there was no shortage of media articles. I was honoured to have been quoted and interviewed by several boxing magazines and national newspapers, such as Boxing Monthly and the SCMP. 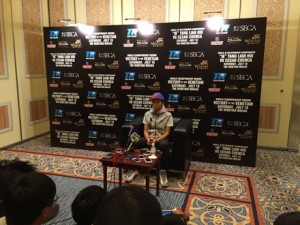 Rex had to cut his weight down to 117 lbs from 122 lbs, so he put on a sauna suit and ran for 45 mins at an easy 10km per hour. I ran beside him on the treadmill to keep him company but without the suit I did not sweat nearly as much as the buckets he shed. He dropped to 119.2 and was so confident about making weight that after our stretch down he had a greek salad.

The next day, we did not need to do any cardio training as Rex was confident that restricting water and no food would do the trick!

In Boxing, any opportunity to make a show and get the press involved is taken. The weigh-in ceremony was no exception and I got to pose for a photograph with the Top Rank ring girls. 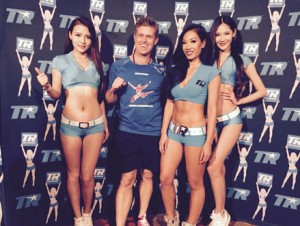 Rex made weight comfortably and looked in great physical shape. This is by no means an indication of boxing ability, but nonetheless, it was a great show and the press / media were getting fired up for the weekend fight.

The team then acted on the re-fuel strategy of electrolyte drink, carbohydrate shot, and then lots and lots of food over the next few hours! 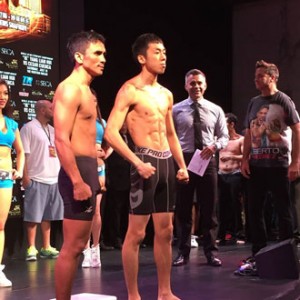 We got to team up with Miguel Diaz, an Argentinian cutman based in Nevada, who taped up the hands, applied coconut butter to the face and gave general wisdom.

It was my job to warm up Rex and we followed my Vitruvian Qi dynamic warm up sequence. This routine is a general dynamic warm up which is applicable to most sports and in fact is the first app that I am launching imminently on the App Store!

From there, Jake brings out the pads and leads the boxing-specific warm-up, and starts to get Rex’s “eye in”, so to speak.

During this time I was getting a crash course on what to do as waterboy, the primary focus being to cool Rex down.

The fight before ours ended by knockout early, which means we were up! 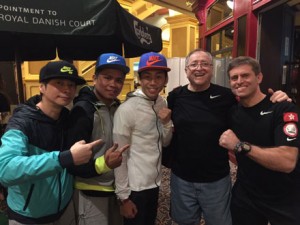 I had a had a look at the arena before the gates had opened so I was a little mentally prepared, but walking down with the entourage I still was thinking, “what is this going to be like“? I was determined to enjoy the moment and tried to take it all in.

I had no idea how famous Rex really was before entering this event, and it was clear that he is a crowd favourite as we got lots of cheers as we entered the Cotai arena.

It was quite a thrill to go into the ring for the announcements. I was calm as I could be, and managed to look around the arena and see Promoter Bob Arum and all the people in the VIP area.

I have already told you what my job was and I wish I could tell you that I did a stellar job- but I got a little over excited about performing the 7 steps that I was going through the motions rather than focusing on the tasks at hand- cooling the body down.

Miguel, my teacher, counselled me that water and ice were not needed in the first round and as Rex was not getting hit, so I could just ease back a bit.

Rex won the fight by TKO- technical knockout as the ref stopped the fight in the fourth round. I would of course have liked to see Rex go the distance for the conditioning, but I also would have liked Rex to knock the opponent out because of the power work we had been doing. 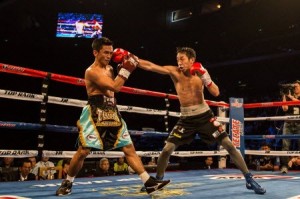 We got to go in the ring and took the victory photo opportunity!

It was great Rex won and I have received a lot of accolades in the press because of Rex’s condition and new power.

You can watch the full video of the fight which has been posted on DEF Promotions’ YouTube channel!

Here is the SCMP newspaper’s review of the fight.

Overall this was a very satisfying experience for me, being able to provide a significant contribution to Rex’s ability in the ring. I look forward to answering the question “what can we do better” in the lead up to the next couple of fights.

Boxing is a complex sport of energy systems and it has been a wonderful experience working with Rex and his team.

I have trained Stephen Fleming, New Zealand Cricket Captain, Vanessa O’Brien, Guinness Book World Record holder (for a woman completing the seven summits and walking to the north and south pole), podium ultramarathon runners, marathon outriggers, ocean marathon swimmers, World Bronze Medal Dragon Boat teams, and have had a hand in helping several athletes that have gone on to win national and world titles in gymnastics and sport aerobics. I have caddied at the Hong Kong Kong Open, supported Trailwalkers and participated in the CrossFit Open.

Each sport presents a refreshing challenge as to how, what and why is the best way to train in terms of energy systems and exercise selection. I am well-known to be thorough and meticulous in my preparation to understand a specific sports movements and energy requirements, and I applied this approach and methodology to boxing and working with Rex and his team.

Stay tuned for more on Boxing training / strength and conditioning as we prepare for Rex’s next fight!