The Spanish company Pavigym launched their new and slick-looking PRAMA software upgrade in a series of events held in Hong Kong. I was among many master trainer candidates from Hong Kong, Singapore, Korea, Japan and Taiwan for a two day event held at Optimum Performance Studio.

Interestingly we held the team dinner at the beginning of the course.

This was a great idea- it served as a good ice-breaker for all the nationalities involved, especially since trainers from all around Asia were present. 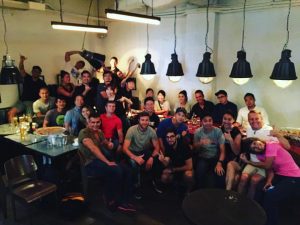 Day 1 involved creator Daniel Gonzalez educating us on the easier-to-navigate upgrades and nice-looking screen design of the PRAMA platform.

A big part of the Pavigym philosophy is to address the capture-and-retention rate of the global fitness industry; the best take up rate is in Scandinavia with around 30% of the population, compared to a worldwide average of only 16%. Generally retention rates also suffer with high member turnover.

Interestingly the overall take up of gym membership is not growing even though there are many boutique fitness facilities springing up and competing for the same slice of pie. It would seem, as Fraser Quelch of TRX has said, that “the fitness industry is failing”.

The chief strategy of the PRAMA interactive fitness system is to make exercise fun. The floor markings and in particular chasing the reactive LED lights is fun and brings out the competitive nature in us, as the software has scores that can be tracked. One of their coolest upgrades is “gamification” to score points- these can also be used as an in-house competition or an inter-franchise or worldwide open event. 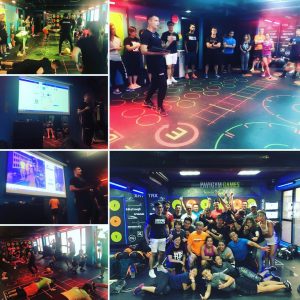 Day 2 was the assessment day where we had to lead two rounds of a circuit class and then present a theory topic of PRAMA- this was random and on-the-spot with no preparation.

You can see my contribution in the video clip below.

I have had a role in Asia Pacific for sometime evaluating and mentoring trainers who are presenting content for TRX. I am in awe of the people who present in their second language of English. What is even more fascinating is the difference that presenting in their own language makes to engagement, passion and animation.

Pavigym and Daniel are a proactive company and will be approaching master trainers with different skill sets to add to their content.

I am hoping to add Bodyweight Ninja to their functional markings. So watch this space in the second quarter of 2017!

You can read more about PRAMA and Pavigym in my earlier blog post here.