I conducted a trainer education session on the Life Fitness Synrgy 360 at the Grand Hyatt fitness centre! The Synrgy is a firm favourite of mine for multi modality and functional fitness training.

The Grand Hyatt Hong Kong has brought in a full range of Life Fitness selectorized and cardio equipment, and a Synrgy 360 multi-station frame to its fitness centre. I have written previously about why I am a fan of the Synrgy.

As a Life Fitness Master Trainer I was asked to give a 2-hour education workshop introducing the Synrgy to the Grand Hyatt gym’s in-house trainers.

To help understand and contextualise the Synrgy’s versatility and utility, we toured the “traditional” gym first to count how many ways we could strengthen the back pulling muscles. We counted two machines. Next, without any coaching, we got the four trainers to see how many pulling exercises they could come up with on the Synrgy. Using the step platform, kettle bells, battling ropes, landmine, pullup bars, TRX suspension trainer, dual adjustable cable columns and rock-climbing pullup attachments, they came up with 10 pulling exercises! 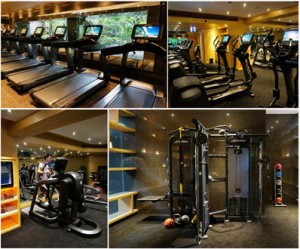 In my “5 Animal Fitness“ system, the pull movement is represented by the Monkey and by using the battling ropes and the D rings attached to the versa frame, we could simulate the climbing and pulling movements that a monkey would do, or more importantly, climb a rope with a low overhang and train (as an example) for a Spartan Race event.

We repeated this exercise for the Tiger Squat, Dragon Twist, Bear Bend and Crane Push/Lunge (all part of the “5 Animal Fitness” program) with me coaching and filling-in the blanks to expand the trainers’ movement library and empowering them with the freedom to create many more exercises.

By the end of the day, we had collated 70 exercises, covering each of the key dominant movement patterns!

The Synrgy Offers Creativity and Versatility

I explained that the Synrgy allows creativity to be expressed; similar to dropping a pebble into a clear pool, there is an expansion of knowledge in concentric circles. The Synrgy allows many functional movements to be replicated, regressed and progressed in a client’s program. It helps to keep exercise enjoyable and challenging, by varying which tool is used to perform the same exercise differently. 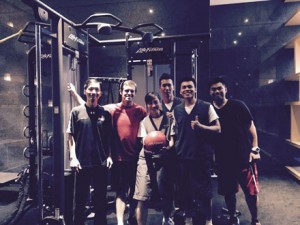