On the Celebratory Junk last night I was asked which Seagods team was the best. My initial reply is that you can not compare one dynasty from another, especially as I have been involved since 2005 which was the first year of Mixed teams at Stanley and we won by 6 seconds! Yet, this question has given me pause as to what it means to be part of a team.

The Best Team Ever

I was introduced to how tough Dragon Boating is in 1990 when I paddled for my works team UDC Finance. I trained the Wellington City Conquerors and the Pru Crew in 1996-2000, Royal Hong Kong X-Men and Women (2003-2004) and have witnessed how the Dragon Boat training forms, storms and norms a group of people into a team.

Being part of the team spirit especially when the team comes together on race day and wins is an incredible feeling and result for a coach. It the time when you can say to yourself “I love it when a plan comes together”. Being part of that bond and creating life long friendships is the best part of being in a team. Paul Eagle, Erin and Pete from the WCC, Yan-yan, Jo, Simone, Antony Wood and many others from the X-men are people I count as friends.

But the way I have seen the current Seagods team spirt grow especially in the circumstances of 2016 I would have to say that by that criteria alone they are the “the Best Team Ever”. 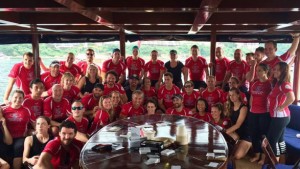 As a Trainer I have always kept my distance to a professional one, I attend most regattas and parties but take a backseat role of supporter on race day as my work is done by then. I rarely paddle for the team as it blurs the paid coach / team member relationship, nor do I want to take the place of a team member. At the parties I rarely let my hair down. I realise (age 48) that a team with great spirit does not have to abide by these rules. More so than the other teams this Seagods have that spirit, in spades.

I was fortunate to know several of the founding members of the Seagods Dragon Boat team with their ethos of a “drinking team that paddles well”. Paul Robinson, Sean Hughes, Tony Evans, Sean Croucher, Bruce Anderson, Jo Eades, Vincent Vaucelle, Peirs Verman, Gina (RIP) are characters/friends that stand out as lighting and keeping that spirit alive. What joy and satisfaction as coach in the first year to knowing you made a huge contribution to winning the 2005 regatta by 6 seconds.

I paddled for the Seagods for the first time in 2012 in an over 40 short boat at the World Crew Championships. That year we were coached by Jo Orgill and managed to secure a Bronze medal. 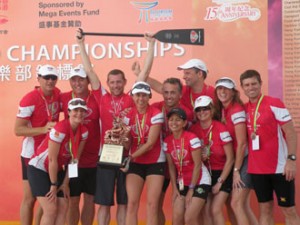 The winning margins come down to a coat of paint with laser timing systems required to separate the 100th of a second from 1st-3rd place!

All competitive teams have fitness tests and introduced land training and recent improvements among competitors have tried to nullify the Seagods’ advantage. Other teams have copied the X-Men and Seagods dynamic warmup and have forced me to refine and look at ways to improve my circuit classes each year to keep an edge.

The Seagods team showed tremendous spirit in the two weeks leading up to Stanley festival and indeed on race day. I believe that the type of adversity that the Seagods were able to overcome adds a universal power that shapes great teams and creates outstanding performances and results. 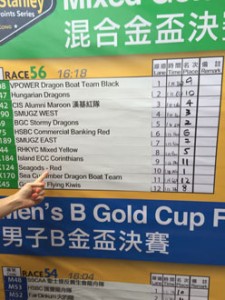 The 2016 Seagods won the Stanley Mixed Gold Cup final by 0.6 of a second from long time nemesis Stormies who beat them by 0.237 last year.

So it was all happy days aboard the celebratory junk with copious champagne and Dj Jason’s’ dancing tunes!

The second race of the day had the Red team compete against the White team and 9 others to decide the teams that go straight to the gold cup final. The chaos of getting 40-odd people onto a sampan from the junk to the start meant that the White team were two people short (two horsepower and about 1 second per person we calculate), there were a couple of ring-ins, people paddling on their unaccustomed sides, and an heavier than usual drummer.

I have seen many teams get distracted by these factors in the hectic cauldron of Stanley Main beach on race day – the whole beach is standing room only, several thousand people getting in and out of boats, nervousness, elation, disappointment are emotions that melt into the atmosphere.

Fortunately for the Seagods we had had some sports psychology sessions a month earlier on how to calm you mind and into how to find your zone of optimal performance and were able to “keep the focus in the boat”.

Two weeks before Kate, one of the 2015-16 characters and the person at the front of the boat who is responsible for setting the teams cadence suffered a minor stroke aged 31. How this team rallied around their team mates is testament to the spirit of the Seagods.

Friends visited Kate in Queen Mary day and night, some in 7’s Fake Nurse and Doctor costumes, flowers, Rachel gave Kate a room in her flat because she had a lift and Kate lived in a 5 story walk-up. Margo helped organise and coordinate visits that from what I could work out on my visit seemed to be continuous. Kate and her american based parents came to the junk and her presence perhaps made a difference for the final. Certainly her trademark aaaaiaiaiyyyaiiaia call was heard coming from the junk prior to the start gun going off and raised emotions about doing it for Kate. At the prize giving Kate was escorted to front and centre of the podium. 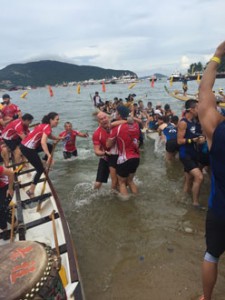 Good people do rise to this type of thing.I have seen it many times. And what strikes me about the Seagods team is that is has always attracted good people.

The 2016 team had no rock stars, no egos and as far as I could tell no divisive cliques or selection politics. The Seagods have a social committee who devise fun activities such as a Scavenger hunt that I participated in, a financial secretary, a COO Gareth and for the last two years someone who I have seen grow from a novice paddler to a very good leader and team Captain Kevin McNeil (backed up by his organisational psychologist wife Casey).

Kevin has a inclusive leadership style, sometimes a little raw, that makes Caseys’s eyes role but everyone laugh and gets everyone to listen without raising his voice and is the fulcrum of the team. He gave a adversity speech based on how Buster Douglas a rank outsider beat Mike Tyson to bring the teams back into focus after the semi-finals debacle.

The Seagods are a very coachable team under his and the support role leadership. The teams structure is very flat in its hierachy and they know how to have fun. 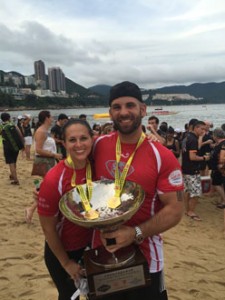 Every year I ask for feedback on how to be better on running the circuits, this feedback resulted in quite a major change from the undulating but linear periodisation I had done previous. I had fun creating arduous challenges and competitions each week. My major aim was to raise intensity, get people to puff and harness the competitive nature of people.

Many people on the junk commented that 2016 was the fittest that they had been for a very long time under this regime and that their “boring” gym programmes had changed forever, some even did the bodyweight ninja workouts (my next app to be released) in their hotel rooms while traveling. 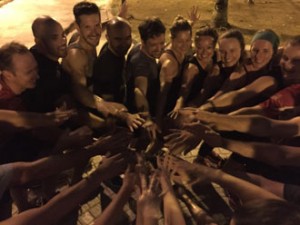 More than the fitness and on-water training, it is the team spirit that separates first from second in Dragon boating (everyone is basically doing the same training). This year the Seagods had a special spirit and that is why I say the 2016 team is “the Best Team Ever”!

Believe it or not this is the only photograph I have holding the BFG. 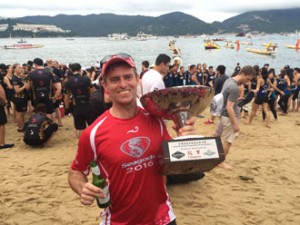